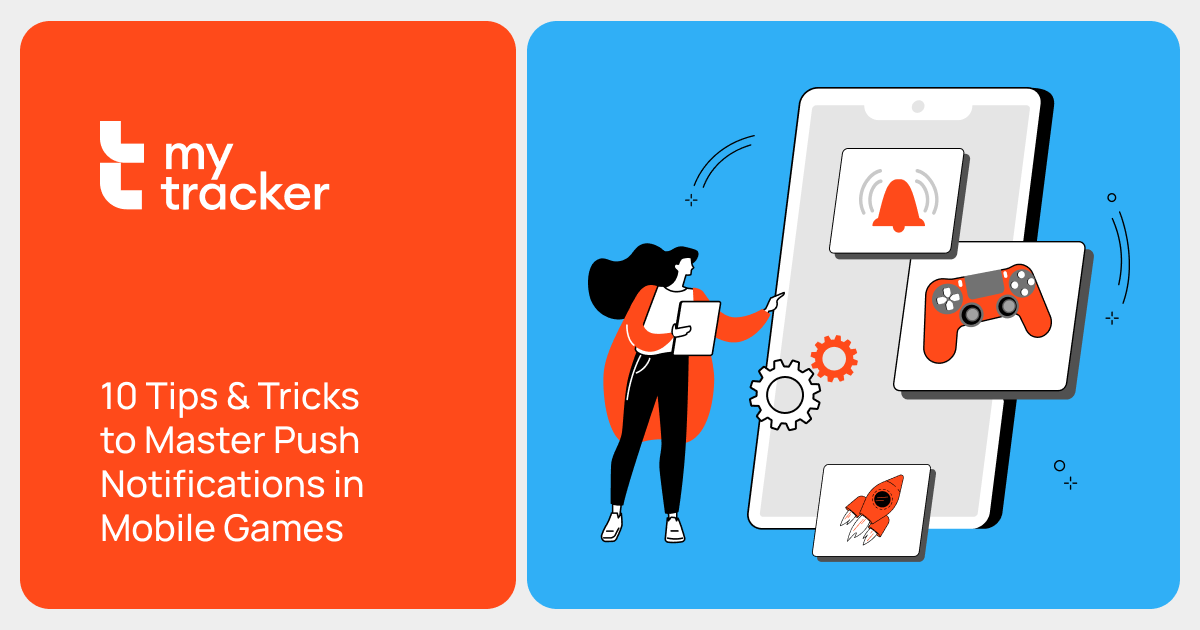 According to the App Annie State of Mobile 2020 report, out of every five mobile app downloads, one is a game, and they account for 70% of global consumer spend on mobile apps.

Sensor Tower Intelligence states that in 2020, mobile games earned USD 79.5 bn on the App Store and Google Play, which represents the major part of the stores’ revenues (65.8% for iOS and 82.6% for Google Play).

According to Newzoo, the number of gamers across all platforms (mobile, PC, and consoles) is expected to rise to as high as 2.8 bn in 2021, with the market reaching USD 189.3 bn.

In such a competitive environment, while it is easier to attract traffic, user engagement and retention remain hot issues. Beyond graphics, gameplay, storylines, and interactivity, marketers need a tool to get users to keep returning to their game apps.

That’s where push notifications come in handy: they might tell a player that their energy has been restored, or that their building has finished upgrading, or that they are being attacked by another player. It’s a clear call to action, driving players back into the game.

OpenBack estimates that 60% of iOS users opt out right from the start. This is largely because mobile game developers make the mistake of sticking to a standard pop-up window.

The best way to increase permissions is to create an intro window explaining the user benefits that come with push notifications.

Among other things, you can mention that users will be able to receive news about in-game events, cheat codes, bonus points, extra lives, and other goodies for as long as push notifications remain enabled.

Let’s focus on what kinds of push notifications can help attract traffic and expand user engagement in Android and iOS.

These are notifications about actions affecting the game process and encouraging users to return. For example: “Your warriors have been trained. Hurry back to the camp and lead them into battle! Move on to victory!”

This is the most popular approach to enhancing engagement and securing retention. You can find out about other tactics for nudging users back into the app in our blog.

Promos in push notifications cut both ways. On the one hand, they encourage purchases, but on the other hand, they make users angry, causing them to block pushes or even uninstall the app.

On balance, you should first see how users respond to other kinds of pushes and then start carefully sending personalized notifications about goods and kits that may help a particular player at a particular stage of the game.

For example: “Sale at the forge! Enter the code word WARBEAST and get 40% off any shield, sword, or armor!”

Targeted pushes are largely based on geolocation. This is a very game-specific type of notification that has taken hold in augmented reality apps, such as Pokémon Go.

Note: Avoid asking players to rate your app while they're in the middle of gameplay, or you'll end up with a bad rating or users leaving your app. Instead, do it when the user feels the most satisfied with the game (i.e. after they finished a level).

Read more on how to get good ratings and reviews for your mobile game app.

5. Make Pushes Part of the Game

Games are all about fun and an enjoyable user experience. The best push notifications in mobile games always treat players with in-jokes using the language of the game.

Games used to belong to the Entertainment category. Now they have their own category but they’re still associated with provoking positive emotions in players.

No one expects a Hollywood comedy scenario, but even tiny jokes can catch players’ attention and make them stay. That’s what they’re here for - to have fun.

Using humor in push notifications can create an emotional attachment that will result not only in a better click rate in notifications but also a higher lifetime value of users who will be excited about receiving fun notifications going forward.

Personalization is a golden rule for push notifications in any mobile apps, with games providing the most fertile ground to work with.

Each in-game achievement can trigger a dialogue or help build an emotional bond. When a player levels up or gets hold of a special item, you can praise and inspire him to do even more. Everyone likes to be commended.

For example: “Wow! You have beaten the Guardian of the Vault in no time! Now look around and search for the Golden Gauntlet he may have left behind.”

8. Inject a Thrill into Pushes

Competition is the very essence of gaming. Many people play to feel smart, strong, and agile, and almost everyone likes to be smarter, stronger, and more agile than others, especially if the ‘others’ are friends and acquaintances that you can brag to later.

Competitive notifications are an option, provided that the game has access to the list of players’ contacts or friends on social media. For example: “Player X has just broken your record! It’s time to show him who’s the master here!”

Your game is not the only app sending notifications. Social media, online stores, and even websites also use pushes to attract traffic. Sometimes your pushes will be competing for attention with dozens of other notifications.

To win, you need to stand out from the competitors with emojis, pictures, and buttons calling to action. The more vibrant your notification is, the greater chance that it will be clicked on.

10. Include Hints in Pushes

Challenging levels are one of the most common reasons why users lose interest and stop using mobile game apps. Here’s how push notifications can help if properly configured.

Let’s say a user fails to level up in a word-guessing game for more than three days. In this case, you can send a notification saying something like: “Psst, the clue to level 42 sounds like the word lead.”

How to Measure the Performance of Push Notifications in Mobile Games

You can come up with very cool texts and set up smart triggers to send push notifications, but you will still fail to increase user retention unless you know how users behave and perceive the notifications you send.

The best way to find a tone that your audience may like is to run A/B tests by comparing their response to neutral and playful styles, hints, and promo notifications.

Metrics to Measure the Effectiveness of Push Notifications

In the case of push notifications, the number of app launches or clicks rarely reflects the entire picture because many users tend to click on the app icon rather than touch the notification itself. That’s why you should use custom events. For example:

Response rate shows how many users opened the app shortly after the notification and whether DAU (Daily Active Users) increased.

Engagement shows whether the number of sessions increased during the period of daily push notifications and how the stickiness rate changed.

Purchases show whether the number of in-game purchases increased as a result of pushes with discounts and promos and how ARPU (Average Revenue Per User) was affected.

You can find out about 10 other important metrics for mobile game apps in our blog.

Push notifications can prove useful in retaining users, fighting churn, collecting feedback, and even increasing sales. As is the case with any and all digital solutions, you still need to continuously monitor their effectiveness and improve and develop their usage.

That’s where MyTracker comes in handy with its templates, flexible custom event settings, integration with many other services, and an option to download raw data.