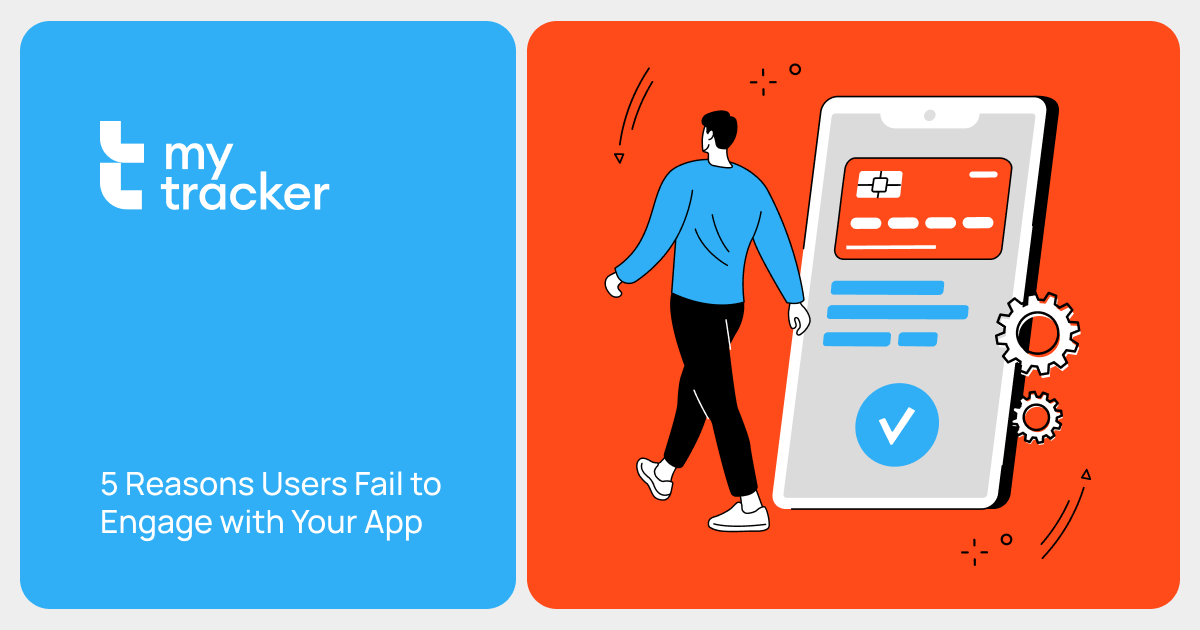 5 Reasons Users Fail to Engage with Your App

When you’ve invested an enormous amount of time, energy, and money into developing an app, it can be exhilarating to see a surge of downloads… and then crushing to see your engagement drop off fast.

Unfortunately, this is something that many apps see time and time again, and there are plenty of reasons why users will stop engaging with your app.

While some churn is natural, if you’re seeing significant reductions in your app activity and engagement, it’s essential to determine why so you can resolve the issue quickly.

In this post, we’re going to look at the 5 most common reasons why users will completely fail to engage with your app right from the beginning of the user journey, and what you can do to change that.

A poor onboarding process will cause an immediate stop in engagement following downloads.

Onboarding is essentially the user’s introduction to an app. Most apps have guided walkthroughs when they’re first downloaded or updated to show users how to navigate and take advantage of all the features. These show up on the screen automatically without users needing to go looking.

This is what you see, for example, when you first log in to TikTok, explaining to users how to navigate the app:

The two following issues with onboarding could lead to a lack of engagement:

When users can’t determine how to navigate a new app and take advantage of its best features, they’re going to drop it quickly and not come back.

To increase app engagement, make sure you have a strong onboarding walkthrough that shows users exactly how the app works and where they can access key features. You should also show them where they should go to get help if they need it in the future.

2. There Isn’t Enough Value in the Free Version

In many cases, apps offer a free version of the app to capture low- or middle-intent users, nurture them, and eventually hopefully drive purchases.

This is known as the “freemium” model, and the idea is to showcase value and build engagement before asking users to upgrade to a paid version of the app or to make in-app purchases.

Sometimes, though, there can be a Catch-22 with the freemium model. Developers don’t want to make the free versions of their apps so valuable that users are never enticed to actually purchase. Simultaneously, if the free versions of app offer too little value, users won’t ever be convinced to purchase.

Let’s look at an example.

Say that you have an activity-tracking app. If the free version of the app only shares fun facts about sleep health and patterns, that won’t be enough to keep users engaged because it has little to do with the primary focus they’re interested in.

If, however, the free version allows you to input your sleep manually, that’s a good start. You can then get users to upgrade to a paid version to track their sleep with tools like their Apple watch and to then offer specific suggestions to improve sleep quality based on that. They get some initial value and an idea of how the tool works, so they’re more comfortable spending money to get the full value from it.

Remember that if users can’t derive any amount of value from the free version of the app and they don’t feel that it’s useful, they may feel a little like it was a scam. They’ll bounce before you know it and see little to no engagement as a result.

3. There Are Technical Issues

Nothing will cause sudden drops in engagement faster than technical issues.

Technical issues could include:

Unfortunately, technical issues can happen easily. Small bugs can have a big impact on user performance.

Even if your app is currently glitch-free, it’s important to monitor it on an ongoing basis, particularly if you start seeing sudden drops in engagement. New updates or new features to the app can cause technical issues.

To look out for glitches, make sure you’re doing the following:

When we’re talking about users who install the app but completely fail to engage much beyond an initial click-to-launch, one of the most common complaints is “too much too soon.”

Some apps, for example, won’t even let users get into the core app dashboard right away. They require users to create a login with their email, name, and/or birthday right away.

This is overwhelming to users, especially if you’re looking at a free version of the app. It’s common, too, for users to not want to create an account until they’ve completed the onboarding tutorials, explored the app a bit, and decided if they liked it enough to create an account. They’re treating it like a tentative trial, and they might feel pressured as if you’re treating it like a contract.

Instead, it’s better to give users a choice right away: Skip or create an account. Dirt Bike Unchained is a great example of how to do this:

Instead of requiring a login immediately upon the first app launch, you can consider the following:

When you do ask users to create an account, make sure they understand what they’re getting out of it— especially if it’s all a free app. The Puppr app does this well; users can access trick training right away, but they let users know the benefits of creating an account.

In addition to feeling pressured when asked to create an account right away, you also want to go easy on the push notifications. If you’re hitting them with ten push notifications within two hours of the app launch, they’re going to be frustrated and overwhelmed.

At best they’ll disable the push notifications; at worst, they’ll delete the app.

5. The Ads Are Intrusive

Ads are a great way to monetize your mobile apps, especially if you have a free or freemium app model. That being said, while the ads should be present, they should never detract from the user experience.

Unfortunately, sometimes they do.

In some cases, ads can end up causing a number of issues that derail the user experience, including the following:

If users are annoyed or find the ads disruptive, they’ll go find another app, simple as that.

In order to check for app intrusiveness, do the following:

The unfortunate reality is that most of the issues we’ve looked at above all have simple fixes and are seemingly small (if not microscopic) moments in the big picture of the customer journey, but a poor experience right when users first launch the app is a death wish.

Take a look and make sure that your app isn’t making one of these five common mistakes that cause users to completely fail to engage with the app after launch so you can improve the user experience and boost engagement quickly. And once you do, you can take a look at our additional tips to keep your users engaged and happy long-term.

Want to know how to track and identify potential issues long before they start impacting your app’s performance on a significant level? Check out our post here.

More like this
7 Inspiring App Onboarding Examples That Will Help You Retain Users March 18 New product: Personalize, a recommendation engine to increase your app revenue December 16, 2021 The Catch-22 of Freemium Models (& How to Make Real Profit off Your App) January 31