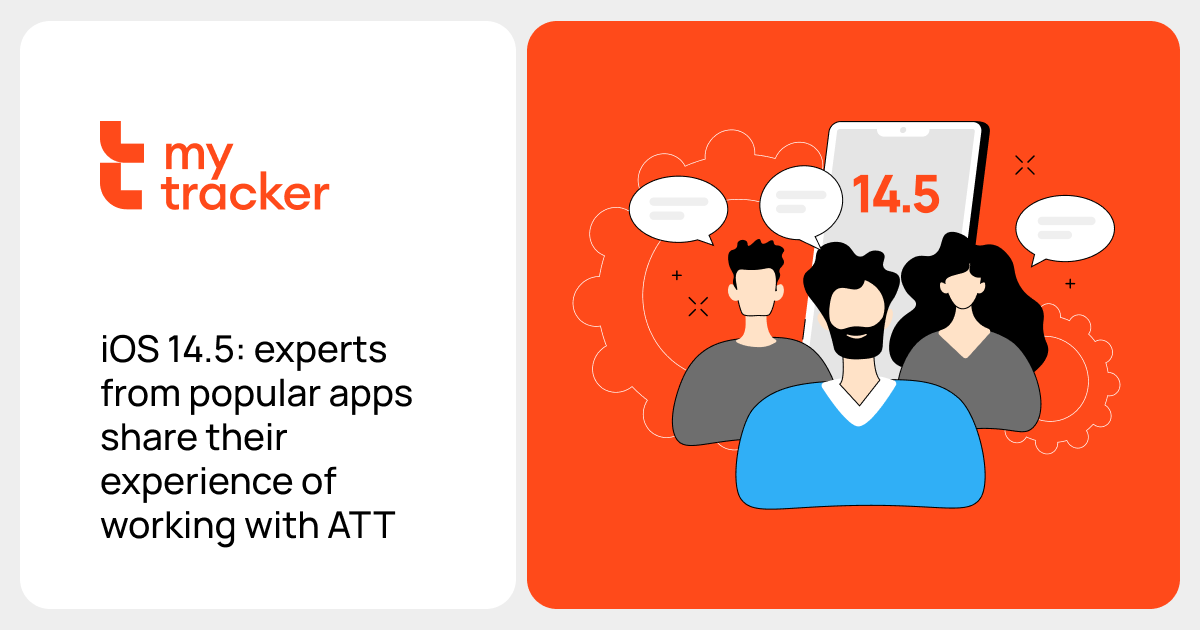 iOS 14.5: experts from popular apps share their experience of working with ATT

Apple is getting ready to release iOS 14.5, the latest version of its operating system. It comes together with a new App Tracking Transparency (ATT) feature, representing a change to Apple's privacy policy.

From now on, all devices running on iOS 14.5 will ask for user permission before sending IDFAs (user data) to advertisers.

IDFA is a unique identifier of an iOS device that enables marketing professionals, app owners, and advertising platforms to obtain information about users. It is essential in order to deliver personalized ads, set up accurate targeting, and link app installation to the ad campaign that has captured a particular user.

A prohibition on the sending of IDFAs can make the attribution structure of ad traffic more complex because it will reduce the amount of user data we obtain. Experts like Tim Koschella from Kayzen believe that up to 70% of users will not allow IDFA tracking as a result of this mandatory alert.

For the scenario where a user denies IDFA transfer, Apple suggests using its new feature, SKAdNetwork. To limit the amount of user data transferred to third parties, Apple will handle attribution on their end and send install information to an ad network.

How iOS 14.5 will affect the market

ATT will lead to fundamental changes in the mobile attribution market and mobile app installs acquisition. The loss of ability to accurately attribute app installs to ad campaigns may hugely damage the efficacy of advertising. Now, information about the device on which the app was installed will not be available either to the ad network or to the promoted application.

Besides damaging the efficacy of ad campaigns, vague attribution may lead to more fraud exposure, because anti-fraud and bot detection solutions will no longer have sufficient click and user acquisition channel data.

All market players, from developers to major advertising platforms like Google and Facebook, are now looking for new opportunities to obtain the required data without violating Apple’s new policy.

But there is no clearly efficient solution just yet, so opinions are divided: some focus on motivation and bonuses for the users who grant permission to send their data, some are working on alternative ways to identify devices, and others count on probabilistic attribution.

One thing is certain – attribution measurement for iOS ad campaigns has changed forever. And perhaps it is just the beginning, with the change soon coming to the entire industry.

“People might think that Apple was sitting out on their own, in isolation. And as much as people think that there is some kind of Apple iOS 14 versus Facebook issue, really, it’s a much bigger issue.”

Experts on their preparations ahead of the iOS 14.5 release

We asked four popular app and mobile advertising industry experts about their expectations of the upcoming iOS 14.5 release, solutions they plan to use, predictions as to UA activity, and forthcoming adjustments to their marketing strategies.

Our budgets are mostly spent on Android, while iOS accounts for a smaller share. But we still update all of our mobile tracker SDKs to the latest versions. We will use SKAdNetwork.

We are going to leverage different ways of increasing the number of ATT permissions. Early on, we will rely on the strategies involving no tracking, i.e. buying inexpensive installs and ad clicks, as part of our iOS campaigns.

At this point in time, we have no technology that could completely solve the problem with the newly rolled-out ATT. Many MMPs work to design their own algorithms for minimizing the loss of attribution data.

I think one of the simplest and most likely solutions will be user identification (IP address, basic device data, time, etc.) by fingerprint, but this will only help match-attribute ads with the device, potentially without providing granular attribution data about the user, which will greatly affect the attribution quality and targeting. None of the currently existing options will be able to prevent the decline in audience reach and targeting accuracy as far less user data will be collected.

Still, iOS 14.5 will hit only some rather than all traffic sources. For example, it will have no impact on Apple Search Ads and practically no impact on Google UAC (in the case of Google, only Display Ads will be affected). It is difficult to predict implications for other platforms before iOS 14.5 arrives.

We added the ATT consent pop-up to almost all of our projects about two months ago. Over this time, we have seen the number of users who gave their consent rise from 25–30% to 45–50%. I think this figure greatly depends on how the pop-up is served and on the project itself.

We have also tried Facebook iOS 14 campaigns – these are tailored specifically to support SKAdNetwork. Even despite a better ATT opt-in rate compared to regular campaigns, the cost of conversion was also much higher. Also, conversion stats are partially collected using ML algorithms and with a delay of up to three days, the actual number of purchases/installs will be very different. Overall, it is hard to predict the implications, at least until iOS 14.5 is released.

People might think that Apple was sitting out on their own, in isolation. And as much as people think that there is some kind of Apple iOS 14 versus Facebook issue, really, it’s a much bigger issue.

Apple are not the only people who are trying to do something about it. Google and Consortium do something called a Federated Learning of Cohorts (FLoC) to make it so that people can no longer be targeted at such a granular level. I mean, Chrome is changing their cookie policy and it means the death of third-party cookies. It’s just a case of how big tech companies can actually provide a game change.

So, obviously, on the publisher’s side of things, the ability to monetize will need to change. They will need to look more at in-app purchases than they had historically. The things that people are getting for free now (news and everything else), they’ll probably have to start paying for. So, ultimately, I think that the end-user will probably lose the most.

It will impact retargeting dramatically and obviously, the only people you’ll be able to remarket are those not on iOS.

Most of our traffic comes from Android devices, so we are not much affected by the situation. However, we will update whatever SDK we can. We also plan to purchase traffic on WW for both Android and iOS, which poses another challenge.

In addition, we definitely see a problem in the fact that after iOS 14.5 is released, different sources will have some limitations on the number of simultaneously launched campaigns per app – up to 9, and the cost of traffic will certainly rise.

How to handle attribution post-iOS 14.5

We at MyTracker are keeping a close eye on the situation in the industry and support the development of alternative solutions that will secure both user privacy and correct attribution.

For more details of our solutions – from SKAdNetwork support in SDK to predictive analytics and fraud protection – see our special article.

Learn about our solutions